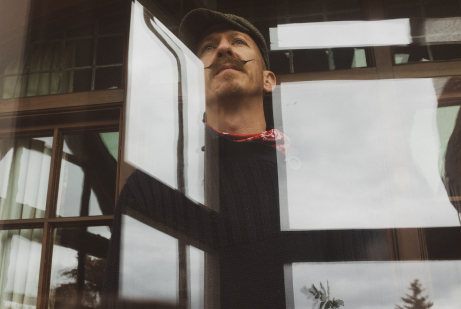 If you miss having dinner with friends, grab a seat at Foy’s table. On The Vinyl Supper, Foy Vance chats songs and food with old friends and special guests. During each episode, Foy has a lively discussion with his guest about what three courses they’d eat and what music they’d listen to at their last meal. And of course, they catch up and chew the fat with moments of levity amidst the cathartic reflection. Foy’s pals talk about everything from pairing burgers with oysters to Japanese beef and redneck sushi. Conversations meander through global tours and global lockdown, losing loved ones and winning Grammys, reflecting on life before and during quarantine. As it turns out, you can tell a lot about a person by their favorite food and music.

In the sixth episode of The Vinyl Supper, Foy catches up with his old friend Courteney Cox. The two haven’t seen each other since quarantine began, so they have plenty to talk about, and it’s a pleasure to be let in on their conversation. We hear how the two have handled life in quarantine, from playing pool to dealing with COVID first hand.

Courteney shares how quarantine has made her reevaluate her possessions, and shares her three favorite pastas—that she never eats otherwise. (Find out why!) We get the deets on her favorite project since Friends, and how her and Foy have dealt with the loss of routine that quarantine has entailed. The two share which celebs make them starstruck, and we finally get that recipe for redneck sushi!

This episode was recorded in August 2020.

In the fifth episode of The Vinyl Supper, Passenger AKA Mike Rosenberg and Foy talk the difference between music and stand-up comedy—and everything in between. Passenger is a multi-award winning singer-songwriter from the UK, with a decade long career (so far) that’s taken him on tours around the globe. You probably know Passenger from his song "Let Her Go," which has been viewed on youtube 2 billion times, streamed on Spotify over 1 billion times, and reached #1 in 19 countries.

Passenger and Foy go through parenthood and the lack thereof—why it’s okay to not have kids. They cycle through some alternate methods of annihilation and ask for the ‘fuck my life mushrooms’ for dinner. The conversation even takes a romantic turn when Passenger asks to be served Foy for dessert!

His latest studio album, Patchwork, is his twelfth album in twelve years, and all proceeds of this album written in lockdown are going to the Trustle Trust, a nonprofit dedicated to providing food to those in need.

In the fourth episode of The Vinyl Supper, guest Chrissy Metz opens with a bang, asking Foy: “Is that your real name?” (It is.) And from that, the two are chatting like old friends. The star of This is Us and Breakthrough gets deep with Foy over the danger of ‘shoulda coulda woulda’s’ and finding God within music. She talks working with Mandy Moore and how the show helped her get started in music: “If my character does it, why can’t I?”

Chrissy calls music her first love, and Foy gets at the heartwarming story of how she made that love into a dream come true. Before quarantine, Chrissy was real busy: performing “I’m Standing with You” at the Oscars, and she recently co-wrote her newest song “Actress” with Nicolette Hayford, Matt McGinn, and Nathan Spicer.

From quarantine in Nashville, Chrissy is now writing and recording her debut country music album. In the meantime, follow up with Chrissy by reading her memoir This Is Me, which debuted on the NYT bestseller list at #1, or watch out every month for her Chrissy’s Most Loved Picks in conjunction with Walmart.

The ever joyous Benny Blanco joins Foy for a rollicking 30 minutes of laughter and reflection. They talk weeding out the shitty people in your life in the midst of worldwide protests. Blanco’s dinner choices range far and wide: french fries and pizza and bagels and sushi. His music choices are more of the same schmorgesborg, cueing up a mixtape of DJ and dance and dads’ faves and Gregorian chants.

Blanco is a jack of all trades, a producer for artists like Ed Sheeran, Justin Bieber, Major Lazer, Maroon 5, Katy Perry, Rihanna, Kesha, Taio Cruz, Wiz Khalifa, Gym Class Heroes, Lil Dicky, and Tory Lanez. When he’s working on his own, Blanco is no slouch—his 2018 record Friends Keep Secrets’ song “Eastside (with Halsey and Khalid)” has been certified 4x Platinum in the US, 9x Platinum in Australia, and 2x Platinum by BPI.

Follow Foy and Benny along with assertions that ‘every house has a toy keyboard,’ and that the choices you make as a kid about art can have a dramatic impact on your life.

Foy’s second guest is four time Grammy winner and 2019 ACM Entertainer of the year Keith Urban. He’s the only male Country artist to simultaneously top the charts in the USA, Canada, and Australia, and has had 24 #1 songs. Keith has spent the better part of his life harnessing a deep-seated passion for music—it’s plot of his life story, with all its twists and turns.

Keith starts out with introducing his precious toy poodle and the chat flows organically from there. He tells Foy about an idol keeping his cool when guitars go missing on tour, and asserts that any version of “Crazy” is a good song. Foy and Keith bat back and forth about vegemite and promite and Keith gives a reading rec—These Truths by Jill Lepore. He spins eternal truths about going out laughing and communing with the dead. Together, the two ask: where would we be without music?

Keith’s quarantine has already been a busy one: he performed Steve Winwood’s “Higher Love” for Lady Gaga’s One World: Together at Home broadcast, and he was the first artist to hold a COVID-19 first responder concert at a drive-in movie theater. In the previous life, his last two albums garnered five #1 songs, including “Blue Ain’t Your Color,” which won Best Single at the 2017 CMA Awards and Favorite Country Song at the American Music Awards. Besides four Grammy Awards, Keith has won thirteen Country Music Association Awards, fifteen Academy of Country Music Awards, four People’s Choice Awards and four American Music Awards. He is also a member of the Grand Ole Opry. But Urban is far more than a musician. He’s long supported numerous charities.  His “All For The Hall” benefit concerts for the Country Music Hall of Fame and Museum© have raised over $4.2 million.  He is the first Ambassador of the CMA Foundation, an advisory board member at the St. Jude’s Children’s Hospital and is a longtime supporter of The Mr. Holland’s Opus Fund and The Grammy Foundation.

Keith Urban’s 10th studio album, THE SPEED OF NOW came out on September 14th and is available from wherever you purchase music.

Foy greets musician and old friend Anderson East for his first ‘last’ dinner. Anderson East came to fame with his albums Delilah and Encore, and catapulted even further with his turn on the Fifty Shades Darker soundtrack.

Foy and Anderson hit the ground running with stories of literal purple rain falling in Minnesota bars, and their food choices are just as enlightening. The joy of jalapenos, a feta cheese and coriander sauce, and the difference between a proper catch up and Fancy Ketchup, and that’s just getting us started. The two dig deeper to talk about the childhood joy of music, entertainment as a caveman instinct, and a possible last moment with The Godfather and pizza. But don’t worry, Anderson finds plenty of time to opine on the possibility of pairing oysters with a McDonald’s cheeseburger and the art of ‘not giving a fuck.’

The two go deep and go easy but end on the note that no matter what happens in quarantine, music isn’t going anywhere.

This episode was recorded in June 2020.

If you miss having dinner with friends, grab a seat at Foy’s table. On The Vinyl Supper, Foy Vance chats songs and food with old friends and special guests. During each episode, Foy has a lively discussion with his guest about what three courses they’d eat and what music they’d listen to at their last meal. And of course, they catch up and chew the fat with moments of levity amidst the cathartic reflection. Foy’s pals talk about everything from pairing burgers with oysters to Japanese beef and redneck sushi. Conversations meander through global tours and global lockdown, losing loved ones and winning Grammys, reflecting on life before and during quarantine. As it turns out, you can tell a lot about a person by their favorite food and music.